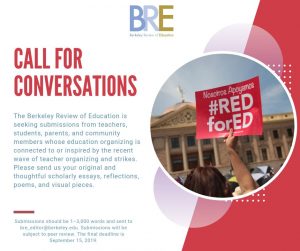 Since February 2018, a wave of unprecedented teacher activism across the country has captured the attention of the American public. Though teacher organizations have continued to advocate for increased pay and improved working conditions, this wave of demands has extended beyond educators’ immediate interests. Collectively, this activism emphasizes national, systemic issues, such as the persistently declining investment in public education since the Great Recession, the shrinking infrastructure of supports for students, and the future of public education in the midst of increased private-sector actors.

Teachers involved in this national movement have articulated a vision of smaller class sizes and staffing to meet complex student needs that extend beyond the walls of their classrooms. For example, Oakland educators advocated for increased nurses in light of the fact that the ratio of students to school nurses in their district was 1,750 to 1 (Flannery, 2019). As political candidates committed to market-based agendas continue receiving support from the economic elite in local and state education elections, educators have highlighted the power asymmetries shaping education policy, such as charter school expansion (Cavo, 2018; Mehta & Menezes, 2018).  This movement has also shed light on persistent declines in school funding, which has translated to inequitable learning conditions for students. In the midst of an uncritical faith in the inherent superiority of markets and the private sector to ameliorate public problems, recent teacher activism has highlighted the devaluation of public workers as a symptom of a broader erosion of public institutions.  These issues, though endemic to education, speak to a broader phenomenon of a contracted state and the day-to-day precarity that citizens face in navigating economic inequalities.

The role of U.S. schools in preparing citizens for participation in democracy is a dark and uneven portrait rooted in colonial practices and exclusion across race, class, gender, ability, and nativity. Though teacher unions have been portrayed as bureaucratic organizations resisting changes that would improve opportunities for students, unions are grounded in labor organizing with broader commitments to a more just and humane economic system. One of the most recognized teacher organizers of the early 20th century, Margaret Haley, argued that teacher unionism should be tied to efforts that advance teachers’ participation in democracy (Weiner, 1996), and in the Jim Crow South, Black teacher unions advocated for desegregated schools and the rights of Black communities overall (Buras, 2014; Walker, 2009; Siddle Walker, 2005). In doing so, these unions recruited the support of parents, students, and the broader community. As evidenced in this history, those on the margins of public education have persisted and reimagined themselves as actors with the potential to push back against limiting structures. Recent teacher activism draws on this history of resistance.

Therefore, teacher organizing—historically and in the contemporary moment—cannot be characterized as narrowly focused on teacher labor but rather as a potential space for advancing the interests of the broader community. At its best, teacher organizing leverages the power of activism in hopes of creating a more just economic system and a radically inclusive democracy. Although this begins with a focus on public education, it may inspire collective action against unjust systems of oppression that impact historically marginalized groups. Thus, the voices of teachers and others within the public education system, especially when organized on a national scale, can provide alternative visions for the future of public education, our democracy, and our economic system.

In this Call for Conversations, we invite educators, organizers, students, and community members to voice how they have spoken truth to power during this wave of teacher activism. We invite those actively working within—or those whose efforts are inspired by—national teacher organizing movements to voice their experiences in local, state, and national movements. We hope these submissions will illuminate alternative visions for the possibility of a more just and radically inclusive world within and beyond our schools.

Submissions will be subject to peer review. The deadline is September 15, 2019.

Call for Conversations 2016: Education in the Era of Trump

The Berkeley Review of Education invites you to the Invitation to the Call for Continued Conversations: Education in the Era of Trump

The swearing in of Donald Trump as the 45th president is a turning point in American history. As a society we are facing the possibility of the implementation of policies and laws that will fundamentally alter our country’s relationship to pivotal issues of race, class, gender, citizenship, the economy, the environment, and health care, among others.  Movements such as the Women’s March, Black Lives Matter, and the Dakota Access Pipeline protests are coming into full force. The need for dialogue across intersectional identities, groups, and fields is also ever pressing.

As we begin a new cycle of conversation, we––educators, students, community members, journalists, and scholars––have the herculean task of making sense of this new reality. As a scholarly journal centered on issues of education and committed to supporting open exchanges about current and critical issues in society, the BRE has created a forum for discussing and asking questions such as: How did we get here?  Where do we go from here? What does the election of Trump tell us about society in general and education specifically? What can we do in our roles and with our skills to teach, learn, protest, resist, and understand education in the era of Trump?

Educators, students, scholars, and community members across the country have written on issues such as the problem of a “neutral” curriculum for education, the role of educators, social justice education, DACA and undocumented students, fake news, women’s lives, school desegregation, and more. Add your voice to the conversations in progress on the topic of Education in the Era of Trump.

We hope that this collaboration will highlight the diverse teaching, learning, and actions taking place in our communities.

Please send us your original and thoughtful scholarly essays, reflections, poems, responses to previous pieces, and visual pieces. Submissions should be 1-3,000 words and sent to bre_editor@berkeley.edu.  Submissions will be subject to peer review; the deadline for this second round of submissions is March 3rd, 2017. 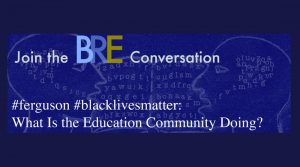 The killing of Mike Brown, the failure to indict Darren Wilson, and the protests and contentious dialogue surrounding these events have again exposed fissures that exist in society as a result of (but not limited to) the dynamics of race, class, and gender.

Perhaps because of this, various media outlets have focused on analyzing the events from political, historical, and sociological perspectives.  However, as a scholarly journal centered on issues of education and committed to supporting open dialogue about current and pressing issues in education (from early childhood to higher education spaces, formal and informal spaces, from scholars and practitioners), the BRE focused on creating a space and elicit dialogue by asking, How are you centering Ferguson in your work in educational institutions, in community spaces, with young people? How are we–as students, educators, scholars, community workers–teaching and learning around Ferguson?

In the spirit of forging communities, we are publishing a collection of thoughtful media from a variety of disciplinary and professional perspectives to incite productive conversations and actions in educational communities. We hope that this collection highlights the diverse teaching, learning, and action taking place in our communities.

Disclaimer: The views and opinions expressed on this web site are solely those of the original authors. These views and opinions do not necessarily represent those of the Berkeley Review of Education, its board, UC Berkeley Graduate School of Education, UC Berkeley, other organizations that sponsor the BRE, and/or any/all contributors to this site. 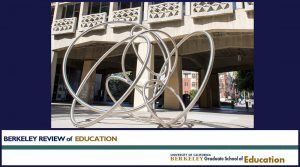