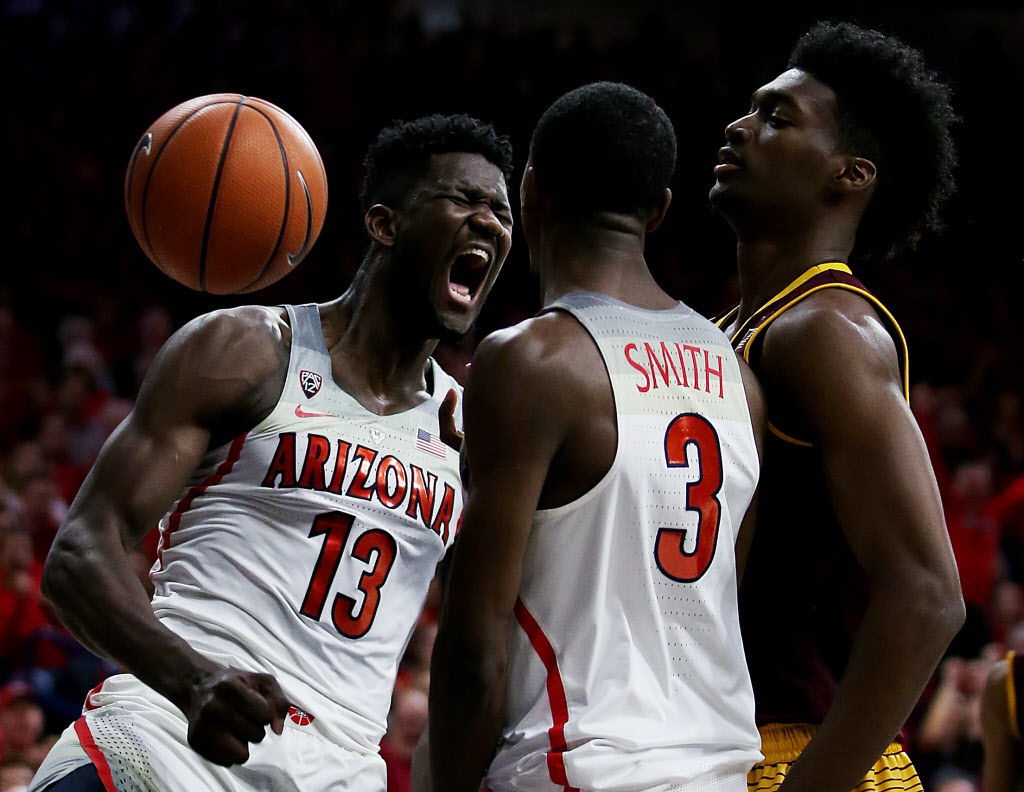 DeAndre Ayton is not your typical college freshman: towering at 7’1” and weighing in at 250 pounds, the 19-year-old Arizona center was a top prospect coming out of high school and is considered the top player in the PAC-12 conference. He is expected to forgo his final three years of college and enter the 2018 NBA draft, where he’s projected to be picked first overall. He’s also at the center of controversy: as discovered by an FBI investigation into college basketball corruption, Arizona coach Sean Miller had arranged an illegal payment to sports agent Christian Dawkins to ensure Ayton’s commitment to play for the Wildcats, valued at $100,000.1 But Ayton is not alone: for years, the National Collegiate Athletic Association, or the NCAA, has faced criticism for the money made from athletes that do not get paid.

More than $1 billion comes from the NCAA basketball tournament alone, also known as “March Madness,” due to a $700,000 price tag for a 30-second commercial and bonuses of up to $200,000 for coaches of winning teams.2 Meanwhile, NCAA football, baseball, and basketball players, according to a 2011 survey, recorded nearly 40 hours a week of practice, excluding hours of competition and outside preparation, comparable to a full job on top of attending school.3 With the NCAA making more than $6 billion annually, it raises the question that has been asked for nearly as long as college sports have existed: should college players be paid?

Under current rules of the NBA Collective Bargaining Agreement, athletes must be a year removed from high school or at least 19 years old to be eligible to declare for the draft.4 Many top prospects then turn to college programs to fill out these requirements; in the latest 2017 NBA draft, of the 60 selected, 18 players had only attended a single year of college before leaving to play professionally. The first player to attend all 4 years of college before turning professional was chosen at 29, nearly halfway through the draft.5 Other professional sports leagues follow similar prep-to-pro regulations: the NFL follows an even more stringent, three-year removal from high school before being eligible for the draft. But before the players turn professional, they must abide by the many rules of the NCAA that considers them amateur athletes and students, rather than employees. They cannot be compensated for a commercial, and they cannot accept prize money from competition beyond the cost of their expenses such as meals and lodging.6 They may only receive money in the form of a scholarship, which covers tuition and other school-related expenses; they cannot be paid a salary or be represented under an agent, and they cannot unionize, as they are not employees of the school.7 All money-related opportunities are reserved for the school and NCAA exclusively.

This NCAA amateur classification of student-athletes fails in its fairness to the players. Their value is immense: the typical University of Texas, Austin football player is valued at more than $650,000 a year based on the program’s annual profits, and the average Football Bowl Subdivision player contributes about  $160,000 a year.8 While other programs bring in less to varying degrees, athletic programs work athletes to extreme degrees without compensation, no matter how the argument is spun. Similarly, the unregulated nature of college athletics can be unfair to students at certain schools, where the revenue brought in from sporting programs do not cover the costs of the stadiums, coaching, and other related costs. For example, students at the University of Virginia recently had their student athletics fee raised to $657 a year, per student, as the program became less profitable over a few rough years. Rutgers University students each pay $326 per year.9 Not every student will attend a football game, nor will every student necessarily care if his or her school has a winning team or a team at all.

With these problems in mind, our criteria for analyzing a policy alternative is threefold. We first want to create a solution that does not interfere with students and optimizes academic success in NCAA schools for non-athletes and athletes alike. Secondly, we want to be fair to the NCAA athletes, by allowing them to make some money from the profits they provide to the multi-billion dollar NCAA industry. Lastly, we want to make this a sustainable program so that collegiate teams can run effectively in the future. This criteria should ensure that schools are meant to serve students first (as a school should), give athletes fair compensation, and offer a sustainable collegiate athletics program.

One alternative policy would be to utilize the existing policy but to change the rulesdefining amateurism. Allowing athletes to be a part of a commercial or an external sponsorship (that does not interfere with the school’s sponsors, such as shoe companies) means that high profile athletes can reap the profits of their fame. Giving the athletes part of jersey sales (which have their names on them) also allows successful athletes to share the revenue of products which are branded with their names. This would be just as good (or bad) as the status quo for students, as the school does not need to provide an additional salary or stipend to their players, and thus the revenue stream would be comparable. However, it would allow students to make money from their talents by being parts of commercials or gaining sponsorship deals. It would also allow for a similar structuring of current collegiate programs without dramatic change.

Another alternative policy involves the continuation of the college to system, with changes. It would first allow programs to pay their athletes on top of scholarships, and limit these salaries to prevent these programs from being entirely money-based. It would, however, allow these athletes to pay for non-school expenses and be compensated for the more than 20-40 hour weeks of training. Additionally, new regulations that prohibit student fees from athletic departments would ensure that the money going to pay these athletes and support athletic programs would not add to the already high costs of higher education. This not only looks out for the general student population and the university but also for the players. It would, however, be necessary for the athletics programs to not run over budget under this system with these new expenses.

Universities must keep the interests of its students and its athletes in mind. The need for change is clear: the NCAA and the programs under its rulings cannot continue to profit off of the free labor of student-athletes. Furthermore, universities, as desperate for money as ever, must prioritize students first and tournament bids second. In 2050, this will be one of the many changes made to our higher education system to ensure the best college experience for every student and student-athlete.

Published in Edition I: The Year 2050, Featured and Miscellaneous