This page outlines the approach and methods in developing the Equal Transit tool. If you are a community group or advocacy organization that is interested in using the tool, please visit this page.

Title VI of the Civil Rights Act of 1964

No person in the United States shall, on the ground of race, color, or national origin, be excluded from participation in, be denied the benefits of, or be subjected to discrimination under any program or activity receiving federal financial assistance. 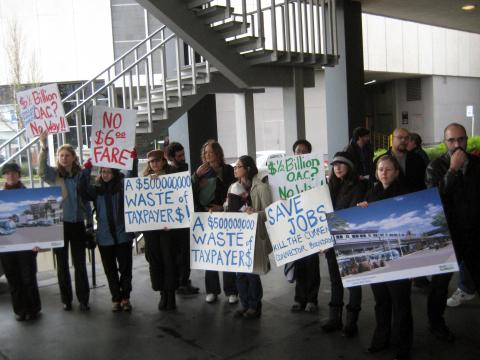 In 2005, a group of 278  minority bus riders and members of advocacy organizations filed a federal civil rights lawsuit against Metropolitan Transportation Commission (MTC) (1). The lawsuit was motivated  by disparities in subsidies per bus ride (about $3 per trip) compared to those per rail transit ride (between $6 and $14) and the expansion of suburban rail service that tended to serve white and  affluent riders while service declined for Oakland bus riders, who were considerably more likely  to be low-income people of color (1).

A more recent example of MTC prioritizing directing  funds toward a new rail project over improvements in bus service is the Oakland Airport  Connector, a 3.2-mile, $500 million rail project built in 2014 (2). The project replaced a local  bus route that provided service to two neighborhoods, in which 95% of the residents were people  of color and 33% were low-income, with overhead rail that does not stop in either neighborhood  (3). BART was found to have failed to complete an equity analysis for the Oakland Airport  Connector project, mandatory under Civil Rights Act Title VI, and MTC was required to  distribute $70 million to bus transit agencies throughout the Bay Area to address funding  inequalities (3). Public transit investments that result in the deterioration of bus service have  health implications, as bus service cuts can leave riders experiencing lower mental health  outcomes, in part due to the increased likelihood of arriving late to work and facing lost wages  (4).

The Equal Transit tool can be used by community groups and advocates in California to determine whether transit agencies are meeting external and internal equity requirements when proposing changes to stop locations.

The tool compares existing and proposed stops by the following equity factors:

How it’s Made and How it can be Used

The Equal Transit tool compares equity metrics at proposed transit stops to existing transit stops for transit agencies within California, using ASC and LEHD data. The tool requires community groups or advocates to have shapefiles with existing and proposed stops, and will provide these entities with data visualizations that can be easily accessible online or be included in reports.

The tool compares residential and job data in census tracts that are within transit stops’ rider catchment areas. The tool has two levels of analysis, basic and advanced. The basic analysis provides aggregate data in clear, easy to understand tables, plots and maps, and the advanced analysis provides more detailed, disaggregate analysis.

BART is proposing to develop a third crossing between Oakland and San Francisco, and has proposed a number of new stations that the new crossing may connect to. The Equal Transit tool has been used to analyze whether these new stations meet BART’s external and internal equity requirements, with regards to serving people of color, non-citizens, low-income individuals, and people without access to vehicles. The Basic Analysis provides an overview of the location of the proposed and existing stops, and aggregated information on demographics and low income jobs within the existing and proposed stop catchment areas.

This basic analysis provides community groups with an overview of whether the proposed stations are meeting equity requirements, and serving under-represented communities better than existing stops. This analysis requires very little data cleaning or manipulation to produce data visualizations, and the data visualizations are made to be clear and easy to understand. Therefore, this level of analysis is relatively accessible to a variety of audiences.

The dashboard is developed to present the basic analysis data visualizations with a url link that community groups can share online. Currently, the dashboard is still under development, (there is only an image of the map rather than an interactive html link because plot.ly dashboards do not allow html links to be embedded, and the platform is not compatible with folium maps). A version of the dashboard for BART’s proposed stations can be viewed here.

Tables 1 and 2 show the descriptive statistics for the variables of interest in the counties BART operates in (Alameda, Contra Costa, San Francisco and San Mateo counties), these can be used when referencing to the existing and proposed stop analyses. 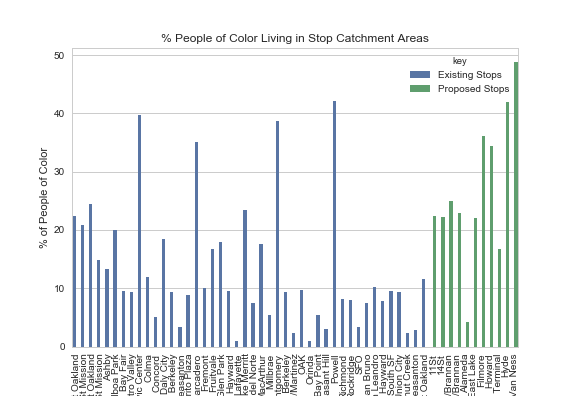 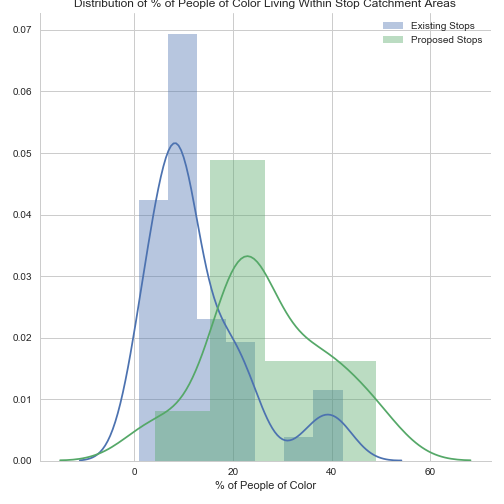 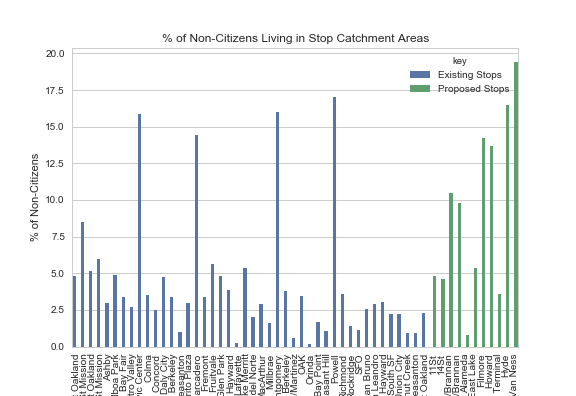 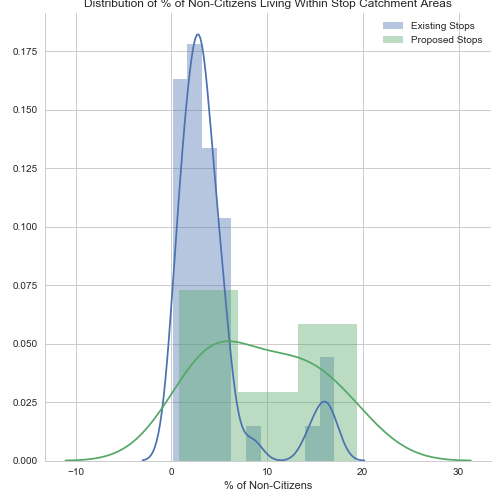 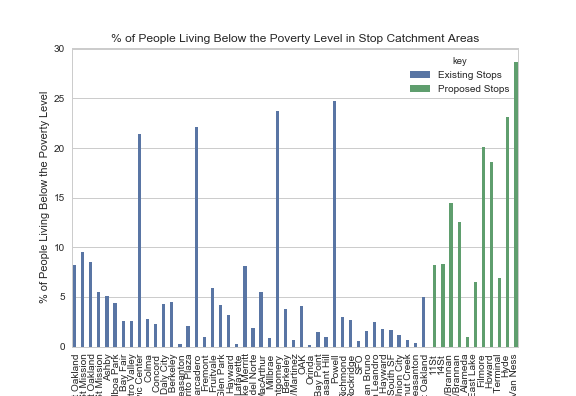 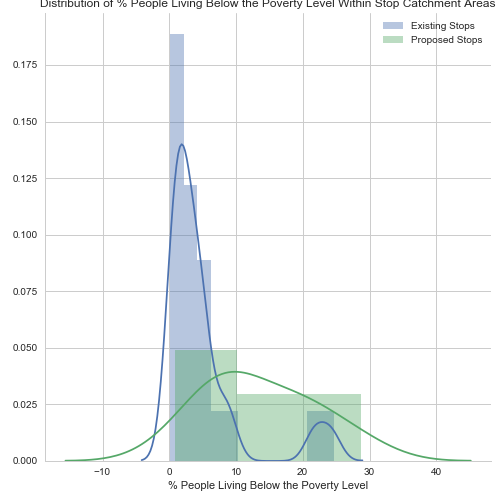 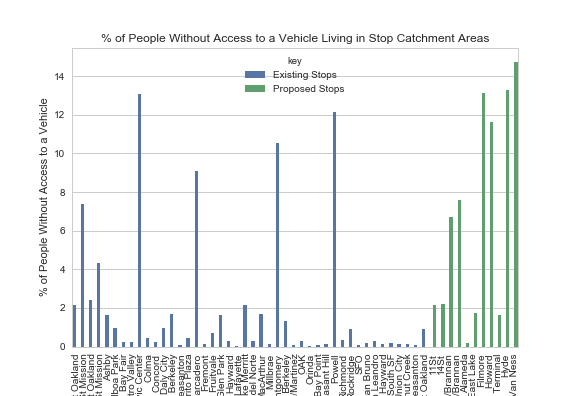 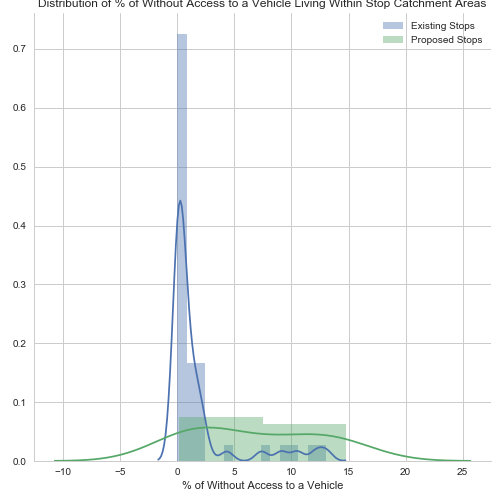 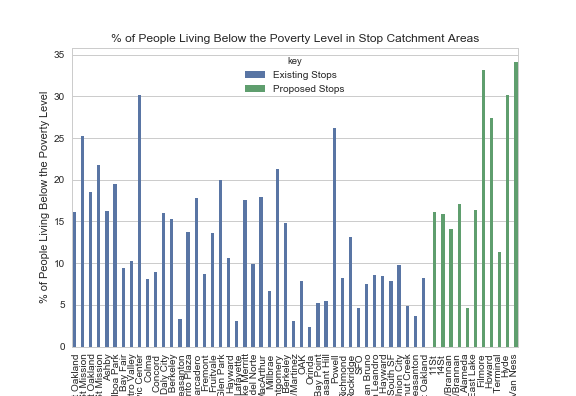 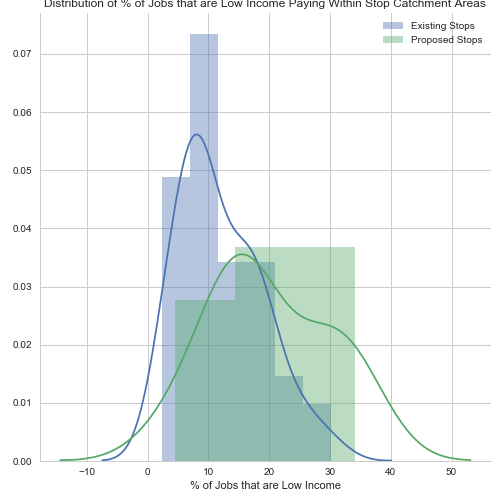 The equity scores compare the demographics the stations serve to average demographics in the counties BART serves. If the station serves a population that is at or greater than the average (mean) proportion of the population in the counties, the station is marked as ‘1’. For instance, the proposed Howard station serves a population that is 34% people of color, while the average proportion of people of color in the four counties that BART serves is 32%, therefore the station scores a ‘1’. If stations serve populations that are at or above county average proportions of populations who are people of color, non-citizens, below the poverty level and do not have access to vehicles, the proposed station receives a 1 in the total score.

Table 3 shows the equity scores the stations receive, and figure 15 shows the location of the stations that score in the total column. These proposed stations include Howard, Hyde and Van Ness. Based on these findings, it may be useful for the community groups to advocate for the selection of these stations in the development of the third crossing.

The Equal Transit tool has a number of limitations. Firstly, the tool is not completely stand alone. The tool still needs to be run by someone who understands basic python, and some data cleaning and manipulation is still required. Secondly, in developing this tool, there was a trade off between geographic versatility and specificity of the tool, specifically when using in ACS data. The tool uses the ACS API, which allows up-to-date data to be used directly from the ACS data source. However, the API only provides census tract information for each state at the most granular level, therefore to allow the tool to be used in all of California, census tracts were used instead of census blocks. If the tool had focused on a specific area, local-level data could have also been used, however the tool would then have a narrower geographic applicability. In developing the tool, there was also a trade off between simplicity and comprehensiveness in the data visualizations. The tool could have created a variety of different types of maps and plots that would have provided a more comprehensive analysis of equity issues related to transit changes, however I chose to instead focus on developing simple visualizations that could clearly portray the data to an audience of mainly members of the public.