During my time in NYC, I found that, despite the large size of the Brooklyn borough, there were fewer transportation options. There was only one train that ran from Manhattan out to the remote location in Brooklyn where I worked. If the L Train was out of operation, I simply could not get to work- and that happened often. Even if the train were running, I would still have to take a bus from the last stop of the train to get to my school.

This is a pervasive problem in New York. You can see in the map below that, even though Manhattan is much smaller than the other boroughs, it has the highest density of train lines.

Looking more closely at this problem, I chose two maps that were in the CartoDB data library: NYC boroughs and NYC train lines. I overlayed these maps so the viewer can see which trains are going where in the city, as well as the density of trains in the different neighborhoods.

While this posed an inconvenience as a teacher, I had the (albeit expensive) option of taking a cab or ride share to work. My students, however, would not have that option. If the trains were down due to maintenance or weather, it was not unlikely that they wouldn’t be able to get to school at all.

Attendance was a grave concern at our school: only about 60-70% of students attended daily. I wondered how much of this was due to poor transportation.

The school in which I worked was at the Eastern most part of Brooklyn. As you can see from the above map, there is no train that links to that outpost. Attendance was a grave concern at our school: only about 60-70% of students attended daily. I wondered how much of this was due to poor transportation.

However, this problem not only plagues adolescent students. This problem of access begins quite early at the ore-kindergarten stage. Many parents rely on Pre-K services because it allows them to go to work and have their children looked after. The service is very beneficial to the children as well: students who attend Pre-K for at least a year prior to entering school perform much better.

This map below was made by overlaying data I gathered about pre-K locations in NYC on NYC borough data from the data library. The data set that I found came from NYC’s open data source tool.

The density of Pre-K centers is much higher in the small island of Manhattan than larger boroughs. Comparing this map to the subway map illuminates an ever more telling story: there are less schools where there are less trains, and vice versa.

What’s more is the concentration of school districts. The map above shows us that Manhattan is almost one district in of itself offering a range of transportation options to those in the district. Sadly, those who live in Manhattan are often middle to upper-class families.

By way of city planning, minority youth are being disadvantaged.

Less resourced families, often families of color, are in the plentitude of school districts located outside of Manhattan- meaning they also have lessened access to schools. By way of city planning, minority youth are being disadvantaged.

While these maps are easily digestible for anyone, their intended audience is policy makers and analysts. It is the hope that simple graphics such as these can illuminate how access to opportunity still plagues an otherwise modernized, developed country.

As troubling as these maps are, they are important. They tell the story about the biased concentration of resources in more affluent, often white, neighborhoods. The cycle of poverty is viciously linked: people cannot work because they have less access to Pre-K. Students who are not attending Pre-K will perform more poorly in school, and  have less access to schools. Their attendance rates will slip, as will there performance and graduation rates. They likely will not go to college, rendering them idle in the place that they grew up.

Policy should focus on opening access to the families who are otherwise stuck in these cycles. By providing more infrastructure (i.e. transportation to schools, Pre-K centers), the concentration of poverty and poverty itself is likely to dissipate.

Born and bred in the Southern California mountains, I have spent a majority of my lifetime outside. I continued this streak as undergraduate at Cal Poly San Luis Obispo, where I was a double major in history and political science. 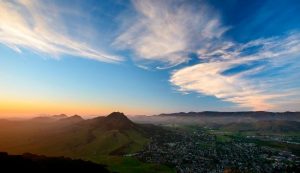 Following college, I moved to New York City as a member of Teach For America. For two years, I taught high school global history in an under-resourced school in Brooklyn and fell deeply in love with education. While in New York, I received my Master’s in Education (M.Ed).

After two years in the City, I came back to the West Coast to get my Master’s of Public Policy (M.P.P.) with an emphasis on K-12 public education reform. Since, I have also become increasingly interested in housing policy. In the spring of last year, I did a feasibility analysis to test whether tiny houses can be used as a viable option to house Oregon’s homeless.

I’m hoping to learn more about spatial analysis so to look closely at the linkages between subsidized housing and education outcomes.

Although my academic training is in research and quantitative methods, my real passions are longboarding, amateur windsurfing, climbing, hiking, and hanging out with dogs of all creeds and color.