Materials with strong electron correlations reveal a host of surprising quantum properties at low temperatures that seem to defy the conventional paradigms of Fermi-liquids, magnetism or superconductivity. In our research we have addressed, among other things, the unconventional normal state of the high Tc cuprate superconductors, emergent magnetic and magneto-transport properties in Oxide interfaces and transport on surfaces of topological insulators. Below we briefly explain a few selected problems we have addressed.

Emergent magnetism and transport at the interface of insulating oxides
(with J. Ruhman, S. Ilani, A. Joshua, S. Pecker) 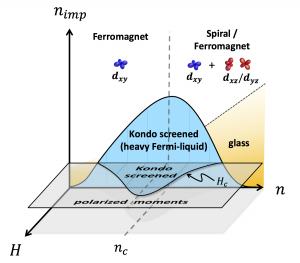 Recently it was found that a conducting state can form at the interface of two plain vanilla insulating oxides. At the interface of LaAlO3/SrTiO3 , for example, the conducting state shows surprising emergent properties  such as superconductivity and even magnetism. Remarkably, both the superconductivity and the magnetism can be changed dramatically with an electrostatic gate opening a window both to highly controlled study and to intriguing applications.

In close collaboration with an experimental group, we investigated the unconventional magneto transport properties tuned by the gate. We explained the surprising observations within a model of metallic electrons interacting with magnetic moments localized near the interface. We argued that the system can undergo a first order transition from a magnetic state of the moments to a state in which they are (Kondo) screened.

Figure: proposed phase diagram in the space of electron density, magnetic impurity density and magnetic field. Magnetism predicted in the low density side of the figure has meanwhile been observed.

Fermi arcs in the high Tc cuprates
(with Erez Berg) 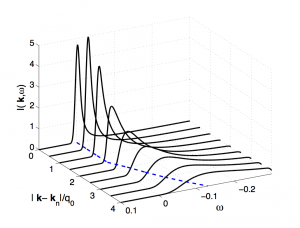 One of the most puzzling aspects of the high Tc superconductors is the appearance of Fermi arcs in the normal state of the underdoped cuprate materials. These are loci of low energy excitations covering part of the fermi surface, that suddenly appear above Tc instead of the nodal quasiparticles. Based on a semiclassical theory, we argued that partial Fermi surfaces can arise naturally in a d-wave superconductor destroyed by thermal phase fluctuations.

Figure: ARPES spectra calculated within our model show a square-root singularity at zero frequency along arcs that lie on part of the original Fermi surface.

Quenching superconductivity in cuprates with Electric Currents
(with Lilach Goren)

The non superconducting state of the cuprates defies many known paradigms concerning metals and superconductors. But since this state is normally exposed only at rather high temperature it is hard say if it stems from a novel quantum parent state. Here we explored how the normal state can be exposed at zero temperature by the structure of the quasiparticle excitations of the superconductor subject to a current close to the critical current. Using a variational approach that takes into account the strong correlations induced by the strong repulsive interaction (poximity to the Mott insulator), we characterized the quasi-particle spectrum established near the critical current as a function of hole doping. We found a dramatic difference in this regard between the under-doped and overdoped regime. In the overdoped regime the entire Fermi surface becomes un-paired at the critical current, implying a conventional normal state. In the underdoped regime partial pairing persists at the critical current possibly suggesting an exotic normal state.

Figure: Partial destruction of the Dirac dispersion (d-wave gap) due to the current induced doppler shift. 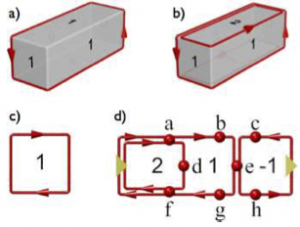 Here we investigated how a magnetic field induces one-dimensional edge channels when the two- dimensional surface states of three-dimensional topological insulators become gapped. The Hall effect, measured by contacting those channels, remains quantized even in situations, where the θ- term in the bulk and the associated surface Hall conductivities are not quantized due to the breaking of time-reversal symmetry. The quantization arises as the θ-term changes by ±2πn along a loop around n edge channels.

Figure: model calculations show how an interplay of orbital and Zeeman effects leads to quantum Hall transitions, where channels get redistributed along the edges of the crystal. The network of edges opens new possibilities to investigate the coupling of edge channels.