Ultra-cold atomic systems offer a new laboratory, with truly unique properties, to study the organization of quantum matter. The unique aspects of these sometimes require us to critically revisit central concepts developed in the context of other systems, thus leading to new insights. A few examples from our work on novel equilibrium states of ultra-cold atomic systems are given below.

Topological States in a One-Dimensional Fermi Gas with Attractive Interactions
(with J. Ruhman and E. Berg) 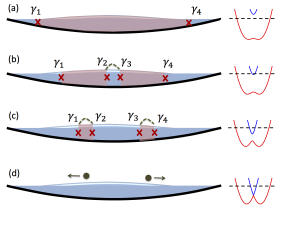 We describe a novel topological state, which forms in a one-dimensional Fermi gas with Rashba-like spin-orbit coupling, a Zeeman field and intrinsic attractive interactions. In spite of having total number conservation (no proximity pairing), Majorana-like zero modes appear in this system and can be linked with interfaces between two distinct phases that naturally form at different regions of the harmonic trap. One phase has gapped single-fermion excitations and in the other they are gapless. As a result, the low lying collective excitations of the system, including the dipole oscillations and the long-wavelength phonons, are doubly degenerate.

Figure: The proposed pumping effect induced by a slow sweep of the Zeeman field from a high initial value down to zero field. 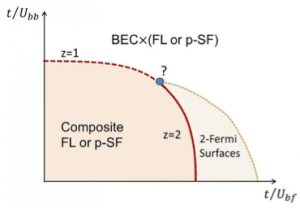 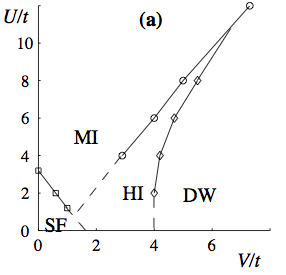 Shortly after topological band insulators were first proposed, we asked if there may be a topological version to a Bose Mott insulator which in many respects is the bosonic analogue of a featureless band insulator. An important difference from fermions is that a Bose insulator can exist only with strong interactions. Using both a field theory approach and numerical DMRG calculations we identified a topological insulator of one dimensional lattice bosons with extended interactions (e.g. dipolar or even nearest neighbor). We termed this the Haldane insulator because of the close analogy with the Haldane phase of integer spin chains.  The figure to the right shows the phase diagram of a system with on site interaction U and nearest neighbor V calculated using DMRG. By characterizing the quantum phase transition between the trivial and topological insulator we have identified the symetries that protect the distinction between the two, thus making the first steps in characterizing symmetry protected topological phases (SPT).
Pumping and phase diagram topology — We have shown that the quantum critical point can be gapped by a perturbation that breaks the lattice 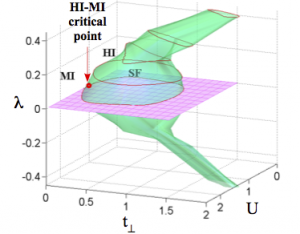 inversion symmetry. Hence in the plane defined by the tuning parameter of the transition (e.g. V) and  symmetry breaking there is an isolated gapless critical point at the origin. We have shown that encircling this critical point adiabatically pumps one boson across the system. When multiple chains are coupled, the two insulating phases are no longer sharply distinct, but the pumping property survives. This leads to strict constraints on the topology of the phase diagram of systems of quasi-one dimensional interacting bosons.
[1] E. Dalla-Torre, E. Berg and E. Altman, “Hidden order in 1D Bose insulators”, Phys. Rev. Lett. 97, 260401 (2006).
[2] E. Berg, E. Dalla-Torre, T. Giamarchi and E. Altman, “Rise and fall of hidden string order of lattice bosons”, Phys. Rev. B 77, 245119 (2008).


Warning: count(): Parameter must be an array or an object that implements Countable in /services/http/users/e/ehudaltman/wp-includes/class-wp-comment-query.php on line 399