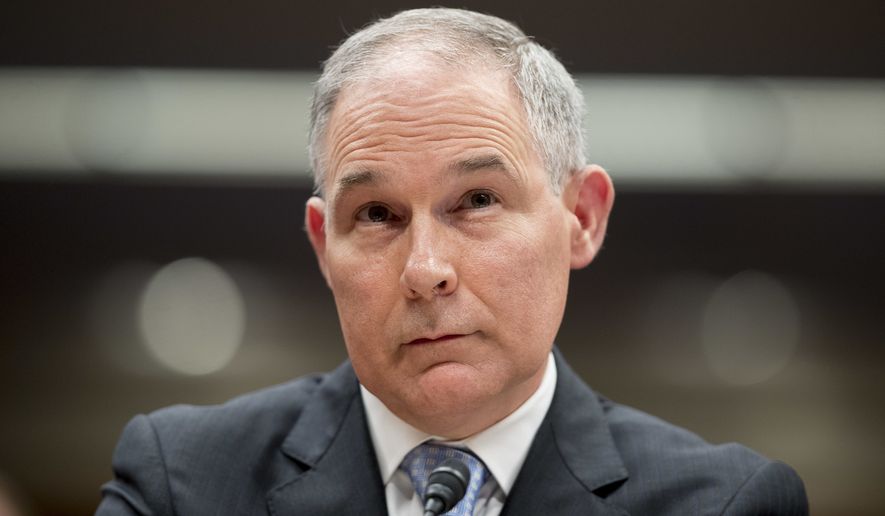 A lone Prius driver gets to drive in the high-occupancy vehicle, or HOV lane in California, even if you’re stuck in your non-hybrid Civic and have just as few people in the car as the Prius driver does. Doesn’t that seem a bit unfair? Just because someone decided to buy a compact hybrid, they’re entitled to special privileges because of the impact they’re supposedly making on the environment. More than ten years ago, the nation began moving away from large gas-guzzling cars and toward more fuel-efficient, environmentally conscious vehicles. In the years of the Obama administration, small but significant steps were taken to create a cleaner environment.

When the United States was an original party to the Paris Climate Accord, the U.S. pledged to cut its greenhouse gas emissions by 26 percent to 28 percent by 2025.1 In making strides to reach this goal, the Obama administration decided to put stricter limits on carbon that vehicles sold in the United States can emit. This effectively meant that the Environmental Protection Agency (EPA), would be raising the average miles-per-gallon (MPG), of cars sold in the United States. According to former EPA administrator Gina McCarthy, the Obama-administration only set stricter emissions standards after extensive negotiations with automakers.2 However, current EPA Administrator, Scott Pruitt, has claimed that, “Obama’s EPA cut the midterm evaluation process short with politically charged expediency, made assumptions about the standards that didn’t comport with reality and set the standards too high.”3 Pruitt, whose decisions have been highly controversial since he took over the EPA last year, also hinted that bigger changes to emissions standards in vehicles are being examined. Specifically, Pruitt has singled out California.

While the lowering of future emission standards has already occurred with a stroke of Pruitt’s pen, he has threatened that he’s considering removing an exception that has been given to California since the passage of the Clean Air Act in 1970. The waiver allows California to set stricter standards than what all other states must adhere to under federal regulations.4 If Administrator Pruitt follows through with restricting California’s waiver to have more stringent emissions rules, he’ll be setting up yet another legal battle between California and the Trump administration.5 The proposed change in California’s status will have major nationwide implications for the United States’ ability to combat climate change and achieve the formerly approved goals of the Paris Climate Accord.

If Pruitt were to change California’s status and no longer grant it an exception to be able to make more stringent compliance standards for emissions, more than one-third of the American car market would be affected, because 12 other states have rules that require them to follow the same emissions standards set by California, not by the federal government.6 In essence, changing California’s standards will change national standards. Since 12 other states have their emission standards tacked to California’s automakers, they often planned on creating vehicles that could comply with the strict California set standards. That way, the states wouldn’t be forced to create more fuel-efficient cars for one-third of the market and then change sales strategies depending on what locality the vehicles are being sold in.

Furthermore, the nation’s automakers had some notice of the requirements to improve fuel economy in their vehicles. In August of 2012, the Obama administration finalized its plans for the new CAFE, or Corporate Average Fuel Economy, which would have doubled the average MPGs for all cars and trucks sold in the United States. After the 2012 decision, the industry average would have to be 54.5 MPG by model-year 2025.7

At the time the new standards were announced, the Obama administration estimated that the new emissions standards “would save consumers $1.7 trillion at the gas pump, cut U.S. oil consumption by 12 billion barrels and reduce greenhouse gas emissions by 6 billion metric tons over the approximately 25 year life of the program.”8 Despite Administrator Pruitt’s claim that the industry would not be able to comply with the fuel efficiency standards, a 2016 report from the EPA and National Highway Traffic Safety Administration had found that automakers at the time of the report’s investigation had been “over-complying” with the rules and that average fuel consumption of produced cars was more than 1.4 MPG over what was expected.9 The report also said that there were “no economic or technological barrier preventing automakers from continuing to boost fuel efficiency and to hit the standards for vehicles based on their size and footprints.”10 It must be noted, however, that the report states, as a whole, that the nation was falling behind the goals set by the Obama administration, mainly because consumers were purchasing more large vehicles like trucks and SUVs than had been anticipated.11

The plan from EPA Administrator Scott Pruitt would likely result in an increase in greenhouse gas emissions over what would have occurred if California were to keep its own standards; it also will lead to more financial waste from consumers who will have to pay more for gas than if they were driving California-mandated efficiency cars, but the plan from Pruitt to limit California’s input would give the auto manufacturers more wiggle room to ease into efficiency standards at what may be deemed a more reasonable rate to develop the new technologies required to make more efficient engines.

In the current Scott Pruitt is trying to make, he hopes to derail most of the nation’s goals for reducing carbon emissions by loosening standards for automobile manufacturers. On the national highway, California is functioning as a Prius in the HOV lane, but Pruitt’s move could remove the HOV lane altogether.

Published in Edition I: The Year 2050, Environment and Featured