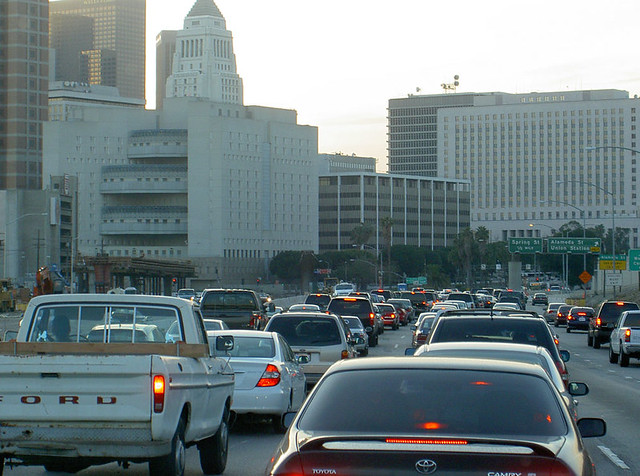 When people think of Los Angeles, images of movies and palm tree-lined streets come to mind. As attractive as Los Angeles may be, with its clear skies and beaches, it comes with a very unattractive traffic affair. According to INRIX, Inc., who specializes in connected car services and transportation analytics, Los Angeles ranked number one in the top 10 most congested cities in the world.1 Los Angeles County boasts a population of about 10 million residents,2  and it is comprised of an area totaling 4,000 square miles,3 so it is not surprising that there is an abundance of cars on the road, yet it is astonishing that L.A. does not have an impressive, robust public transportation system to transport the millions of Angelenos everyday. Some would blame the county’s sprawl due on its lack of geographic restrictions or on its burgeoning car culture stemming from the Roaring Twenties;4 but whatever the combination of reasons, both residents and policymakers agree that better public transit is necessary for Los Angeles County to alleviate the traffic issue. Not only are improved bus and train systems needed to mitigate congestion, but public transportation is also a very significant infrastructure tool for disabled, elderly, youth, and low-income residents for their access to jobs, schools, and other resources that Los Angeles has to offer.5

Policymakers and advocates have been pushing for improving public transit for years, and in 2016, the Los Angeles Metropolitan Transportation Authority (Metro), passed Measure M. This is a sales tax measure, called the Los Angeles County Traffic Improvement Plan, which authorizes a ½ cent sales tax and continues the existing ½ cent Traffic Relief Tax until voters decide to end it. This sales tax would provide funding to expand rail, subway, and bus systems;  improve freeway traffic flow and safety; repair potholes and sidewalks; improve job, school, and airport connections; and other developments that would improve transit in L.A. county. These projects are set to be completed by 2040. The measure is expected to raise about $860 million per year. In addition, for accountability, Measure M outlines an independent oversight process that includes a Taxpayer Oversight Committee and annual audits.6

The majority of the funding (35 percent) will be invested in new transit construction, including 100 miles of Metro Rail and 65 miles of Bus Rapid Transit.7 Extended lines for the train and bus system increase accessibility to different parts of the county, giving riders more opportunities to pursue better employment, education, healthcare, dining options, and more. In addition, with an increased number of trains and buses, transit will able to arrive more consistently, which is vital for workers and students who have strict timetables to maintain. Housing is also closely interconnected with access to transportation. Low-income residents who cannot afford a car must choose to live near a place with easy access to public transportation, which limits their options for affordable housing. With the new transit, low-income residents will have more choices for housing, and they are not forced to choose between living in expensive housing and near public transit or vice versa.

Another significant portion of Measure M is the funding for Local Return. 17 percent of the measure goes towards Local Return, which is per capita funding to municipalities in Los Angeles County for their own transportation projects. Each subregion has outlined their projects that they want to implement, such as pothole and sidewalk repairs, traffic signal synchronization, and bike lanes.8 This is a crucial inclusion because it gives communities a say in what they want to repair or create, and it gives them a more hands-on approach to solving transportation issues that may be difficult on a broader county level.

Although there are many excellent tenets of this measure, there are a few downsides as well. Critics have commented on the measure’s “no sunset” plan, which means there is no set date on which the sales tax would end and will instead be voted upon when needed. This was implemented to get more projects finished in the 40 year period with more funds to leverage that would be hindered if the tax, and the limits that accompany it, were to cease.9 One critic, Los Angeles Supervisor Don Knabe, felt that there was not enough of taxpayer protection, as the measure allows for changes to outlined projects at anytime if it those alterations able to garner a two-thirds vote by the board.10

Another concern critics have are projects that seem expendable and counterproductive, such as the “high desert corridor” highway connecting Palmdale to Apple Valley, which would create more sprawl and congestion, and the low-ridership Gold-Line rail extension to Claremont.

Overall, Measure M, the Los Angeles County Traffic Improvement Plan, would reduce congestion in the county and benefit the many residents who rely on public transit, such as disabled residents, the elderly, low income workers, and students. Furthermore, it supports local communities in their own transportation plans, which may make improving transit in Los Angeles County more effective by tackling local issues and concerns as well as county-wide ones. Finally, Measure M encourages the increased use of public transit, which will reduce carbon emissions, support the development of new transit technology, create jobs, and much more. Although there are a few setbacks in the plan, only time will tell if Los Angeles’s ambitious transportation plan will be a success.

Published in Edition II: No Place Like Home, Featured and Miscellaneous