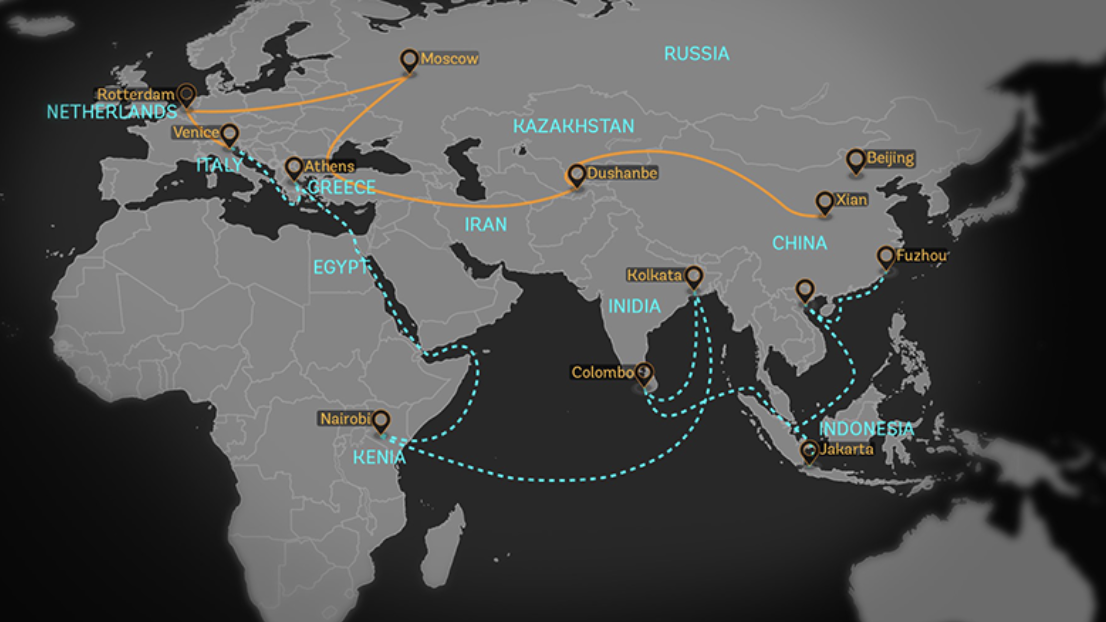 The Chinese “New Silk Road”: The Belt and Road Initiative

Disclaimer: The views expressed in this piece do not in any way reflect the view of PRB.

As a development strategy adopted by the Chinese government, BRI is generally believed to have a relationship of inheritance with the acclaimed, historical “Silk Road.” However, though it brings opportunities, it BRI also faces challenges.

rom approximately 114 B.C.E. until 1450 C.E., an ancient network of trade routes connected the East and West. This trade network was aptly called the “Silk Road”, as silk was one of China’s major exports.

In September 2013, during a visit to Kazakhstan, Chinese President Xi Jinping introduced a plan for a new Silk Road from China to Europe. The latest iterations of this plan, dubbed the “Belt and Road Initiative” (BRI), includes a land-based Silk Road Economic Belt and a 21st Century Maritime Silk Road, mainly aimed at promoting foreign investments and fostering collaboration in the region.

The routes sound very similar, but there is a clear difference between the old and new Silk Road. The Silk Road was originally created by the merchants and traders, driven by the demands of exotic merchandise, and then developed and protected by the Chinese empire. The BRI however, has been proposed by the Chinese government. “It’s an innovation, not a reconstruction,” said Ge Jianxiong, the historian and geographer.

Nevertheless, there is no denying that the BRI is inspired by the ancient “Silk Road,” which received concerns from both sides of the aisle. It also resurrected discussions about this “New Silk Road” worldwide that have been rife with criticism. The main critiques are centered around the possibility that  this “win-win” situation could end up with only one partner winning — China.

One concern is about the creation of a debt trap among many of those same nations (the nations which participated in the BRI), triggered by lending money at unsustainable rates that could tank their economies over time.

Chinese Vice Minister of Foreign Affairs, Le Yucheng, however, sees no direct connection between the debts of certain countries and the BRI. It has only been five years since the BRI was first introduced; however, the debts of a given country have many contributing factors, and as they say, “Rome wasn’t built in a day.”

A report issued by the Central Bank of Sri Lanka in 2017 indicates that this year, the country has a total of over 50 billion dollars of foreign debt. China only owns 10% of that sum. Furthermore, over 60% of Chinese loans to Sri Lanka have a rate far below the average in the global market.

There are also concerns about Chinese influence in recipient countries. Some think that the BRI could be used as a tool for culture exportation; some raised the question to a level of idealism. Former German Minister of Foreign Affairs, Sigmar Gabriel, gave a speech on February 18th at the Munich Security Conference in which he noted that China is trying to build a system that “differs from freedom, democracy, human rights, and other Western values.”

Yet, one must recognize that cultural exchange is merely an inevitable collateral consequence of global trade. Since the world now in an era of information sharing and globalization, it is neither efficient nor worthy to create such a huge initiative that utilizes hundreds of billions of dollars and an enormous amount of manpower for the sole purpose of exporting Chinese culture.

It is also incomprehensible logic to relegate ourselves the Cold War thinking of the 20th century, dichotomizing the world by simple friend-or-foe patterns, trying to create new conflicts between nations on the basis of ideology alone. These types of actions fight against the wave of economic and cultural globalization and will be proven narrow-minded in the course of history.

There are also analyses that claim that China is seizing control of regional and global strategic assets — such as overseas airports and ports — for military purposes under the guise of the BRI. A frequently cited example is the Hambantota Port, which the Sri Lankan government handed to Beijing on a 99-year lease when it could not repay the loans it had taken.

The fact is, according to government sources, the Sri Lankan government made the proposal, asking China to construct and run the port. Two joint corporations share the stock ownership of the port. Importantly, the Sri Lankans always have sovereignty over the Hambantota Port and can, when needed, buy back the stocks which are held by Chinese corporations. Once again, we must clarify that China never has an expansive strategy and never seeks overseas garrisons, unlike certain nations.

In truth, China’s Belt and Road Initiative has been clouded by criticisms amid complaints of excessive reliance on Chinese workers over locals. Targeting this situation, a panel of experts at the Milken Asia Summit in Singapore suggested that it would help if Beijing were to increase its engagement with local stakeholders.

As a regional cooperation and development strategy which requires a huge amount of effort, the BRI might be too young to be qualified in its fifth year, as it appears to be in the stages of preparation and in its infancy. At the second summit in 2019, the number of participating countries and the level of representatives could provide the world with a glimpse of countries’ attitudes towards this type of global trade policy. After all, to better understand this policy, it is necessary to “participate and at least be part of the conversations” according to Mr. Kevin Sneader, McKinsey’s chairman in Asia.